Category:
Our Recommendations
Published at:
04 December 2019 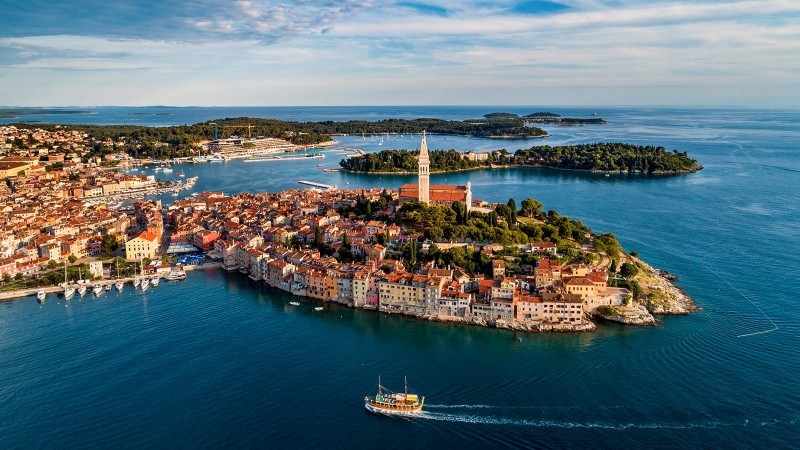 Rovinj is a small town with only 15.000 inhabitants and is the strongest tourist center of Istria. Rovinj has a distinctive appearance and is surrounded by a total of 20 islands and islets (the best known are St. Catherine and St. Andrew). Rovinj is one of the most picturesque towns in the Mediterranean, characterized by art and romance.

As the official beginning of tourism in Rovinj can be taken the year 1888, when health resort Maria Theresa opened. This oldest institution of its kind on the Adriatic coast was built by "the Viennese society for the upbringing and development of marine hospitals and asylums for poor children and the sick rickets." This was followed by the construction of Hotel Jadran (today “Adriatic”), which was built before the First World War due to increasing tourist visits and arrivals of prominent figures on vacation.

Rovinj differs from other cities by its completely preserved urban core that is naturally grown and was built up under various influences. The core is characterized by numerous covered overpasses that open passages between individual streets or blocks of the houses. Panorama of Rovinj is enriched with the high tower of the church of St. Euphemia, with its statue on top, that seems like guarding high above the city rooftops.

COAST AND BEACHES IN ROVINJ

Rovinj's coast is a unique natural environment because there are 2.289 ha of protected green areas, 14 islands, islets and 6 cliffs. The coast has many beaches and is 67 km long. Thanks to the impeccable cleanliness of the sea and the wealth of marine life, Rovinj is very frequently visited by lovers of diving and snorkeling.

BALUOTA BEACH (Monte) - To the locals the beach is known as "Monte". The beach is about 150 m long and is located on the west side of the old town. The beach is rocky, but there are also parts of the beach that have pebbles. Rovinj is the only city on the coast that has a beach in strict city center. Attractive rocky beach at the foot of the church of St. Euphemia is in the evening transformed into a special place for unique events. Special lighting enables undisturbed nighttime swimming.

MULINI BEACH - The beach with a very accessible shore, linked to the town's marina. It is located south of the old town. From the city center is a 10-minute leisurely stroll along the waterfront of Rovinj. The beach was completely remodeled in 2014 with modern surfaces covered in white concrete, combined with the natural rocks. Broken concrete surfaces are perfect for people who enjoy sunbathing.

LONE BEACH - After the renovation it became the most famous and visited beach in Rovinj. Located at the entrance of the park forest Zlatni Rt, it provides a beautiful view of the old town and on the island of St. Catherine. Since located close to the old town and numerous hotels of highest quality, it is enriched with new sunbathing areas and additional facilities. The beach is covered with gravel and is very suitable for families with children. For those who want privacy, in the vicinity there are smaller rocky beaches.

ZLATNI RT BEACH (Punta Corrente) - Many beaches are located within the park forest Zlatni Rt, and are composed of a series of rock and gravel sections. The whole area is full of native plant species and exotic trees that were planted over the years. Thanks to the wide meadows and forests, the place is ideal for sports lovers, for children, as well as for a relaxing picnic with family or friends. For adrenaline lovers, there is also a very popular climbing wall, located inside a former quarry.

SKARABA BEACH - Bay Škaraba is located within the forest park "Zlatni Rt", about 3km from the city center. The whole area is full of native plant species. The beaches in this part of the coast are frequently visited, especially on the west side. The coast is mostly rocky with a few small bays covered with pebbles. The beach offers flat rocks suitable for sunbathing.

KUVI BEACH – Bay Kuvi is located near the tourist village Villas Rubin, approximately 3 km away from the center of town, but extends to about 1 km of coastline. The beaches in this part of the coast are very visited because of gravel, pebbles and easy access to the sea. Nearby there are restaurants and bars, showers and a sport center that offers loungers, canoes, etc. The beach is perfect for both sun lovers and for those who like to relax in the shade of the trees.

PORTON BIONDI BEACH - Public beach in a wonderful location just 15 minutes’ walk from the historic center of the city, close to the camp Porton Biondi. The beach is mostly rocky, but there are several bays with pebbles and gravels. The peers are the perfect place to enjoy sunbathing. The beach has very little natural shade, but objects on the beach offer the service of renting beach umbrellas and loungers.

FIGAROLA BEACH (Borik) - Borik is part of Rovinj located about 2 km from the city center. The beach in Borik is called Figarola (named after the island that the beach overlooks). The beach is in a sheltered cove, named Val de Lesso, in the northern part of town. The grove with tall pine trees provides pleasant shade during the summer heats. The beach offers several bars and restaurants overlooking the sea. One of the main features of the beach is a beautiful view of the old town and nearby islands.

CISTERNA BEACH - Cisterna Bay is located 7 km south of Rovinj, and is characterized by pebble coast and attractive locations away from the main tourist destinations. The turquoise sea, surrounded by lush greenery, make a unique romantic atmosphere. The small bay offers a beautiful view of the island "Two Sisters", located a few hundred meters from the beach. The beach has almost none of additional facilities, but that makes it the perfect place to experience a touch of wilderness.

BEACH ON THE ISLAND OF ST. ANDREW - Island St. Andrew is the largest uninhabited island of Rovinj archipelago, also known as the Red Island. Well preserved rocky and pebble beaches are especially suitable for children. The island is, with a pedestrian bridge, connected to the neighboring island of Maskin, known destination for many naturists. Boats to the island of St. Andrew depart from the city center every hour and the ride takes about 15 minutes.

BEACH ON THE ISLAND OF ST. CATHERINE - St. Catherine Island is one of the most beautiful islands of the Rovinj archipelago and is located only a few hundred meters from the city center. Boats to the island of St. Catherine depart from the city center every hour and the ride takes 5 minutes. Most visited rocky beaches, with accessible bays are located on the eastern side of the island. On the western side of the island there are the famous cliffs: Golden, Silver and Bronze, suitable for lovers of cliff jumps.

BEACHES SUITABLE FOR PETS - In Rovinj there are three small beaches where swimming for pets is allowed. These beaches are located in the Bay Lone, Bay Kuvi and Bay Borik.

Rovinj Advisor was in Poreč at 35th Promohotel (International Fair of Food, Drinks and Equipment for Tourism). Here are some picures:... 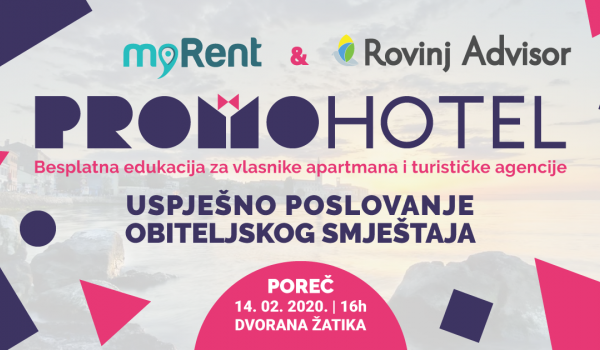 You love tennis? If you do, then contact Tennis club Sunny. Here you can find two professional tennis coaches.  As well as tennis school...

Very often people are asking us where to eat, where to park and what super-markets can we recommend. On this map you can find main parking places,...